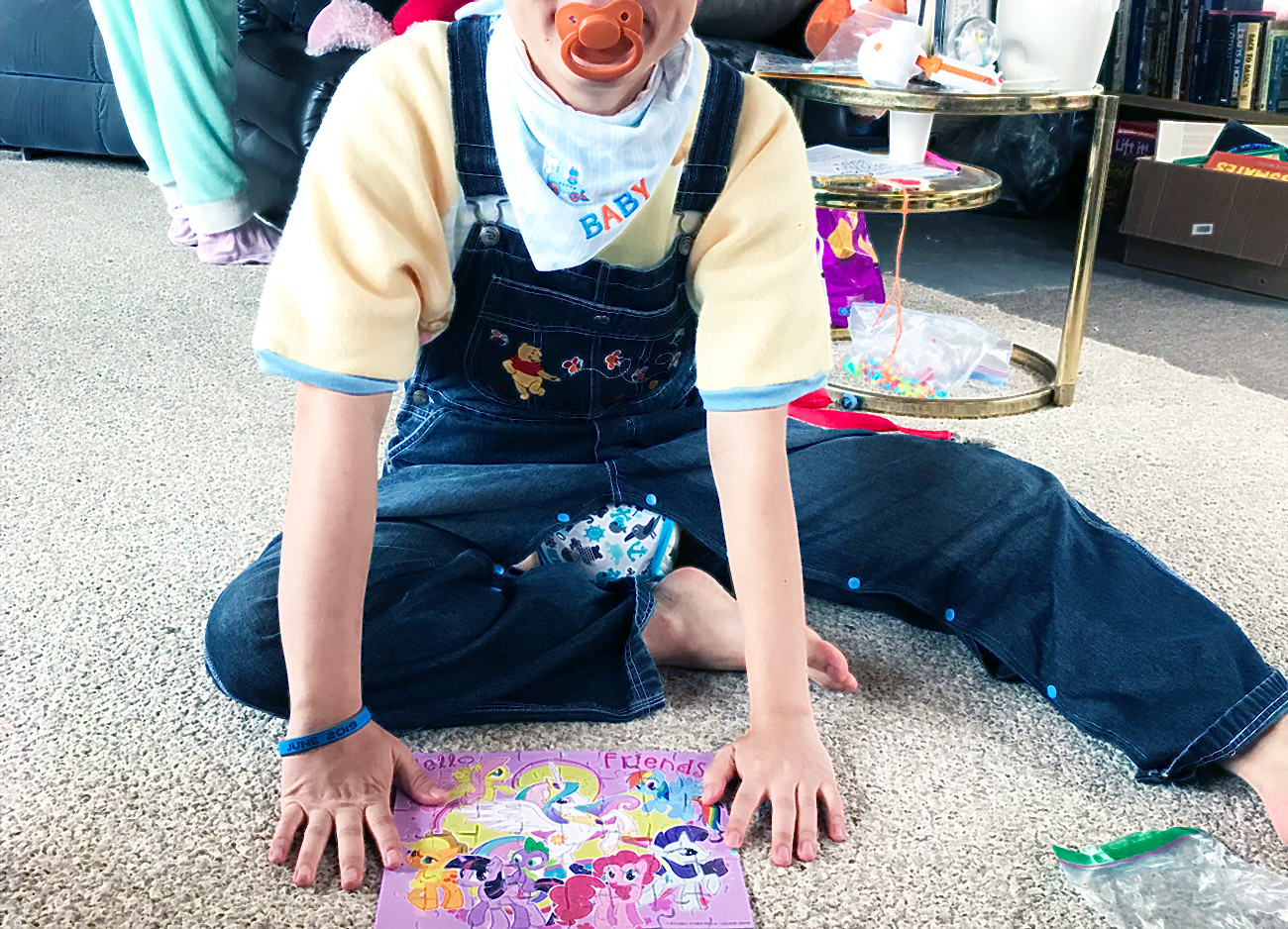 There’s a danger in what I’m about to recommend. Stray Lego pieces, piles of plushies, and a rare wet spot can all become hazards for the Daddy to the adult baby or little boy.

But the dangers are worth the cost. Because there’s really only one place for a little one to play…and that’s on the floor!

Yes, cuddle time and watching Paw Patrol can be on the couch with Daddy. Yes, dinner time should be in his high chair (or on a makeshift ‘booster seat’ at the table…even a cushion on his chair can help give him a dangling feet feeling appropriate for little ones).

But when it comes to colouring, jigsaw puzzles, Lego or building blocks, your little one should be on the floor.

So, the first part of this rule is somewhat obvious: when an ABDL boy is on the floor he is at a “more little” eye level.

Daddy might be sitting on the couch. Or he might come and check in on him now and then, standing above his little guy and giving him words of encouragement as he tries super hard to stay between the lines of his dinosaur colouring book!

Being on the floor gives him that toddler-eyed view of the world. The world is up above him!

But it isn’t just perspective. Most adults don’t lounge around on the floor! They have tables and chairs and couches and desks.

And so being on the floor helps to break some of the ingrained habits of adulthood. It helps him to feel safe to breakout of some of those ‘big’ rules: that reading should be done in a chair or on the couch, that a “project” should be done at the dining room table or in the office.

Now, there’s one other reason that your little guy should play on the floor: it helps reinforce that he’s diapered.

As he sits, Indian style, to assemble a Lego dinosaur, his diaper will crinkle beneath him in a way that it doesn’t on the cushions of a couch.

Lost in little space, his diapers will crinkle. He will be focused on his play, but every now and then you’ll notice that special way the muscles in his body shift to indicate he’s wetting.

It’s important not to go too long without a diaper check! And there are so many kinds!

Often, you shouldn’t say anything about the diaper checks. They are subtle little reminders that he’s a diapered boy. They reinforce that Daddy is there to check his diapers and decide when he’s ready for a change.

Sometimes, a simple “good boy” will send a little shiver through his body. Maybe Daddy means “good boy” for his Lego sculpture? Or did he mean “good boy” for wetting his diaper like a baby? Either way, he might feel a blush of either pride or embarrassment!

When he’s ready for a change, expect a little whimper if he’s in the middle of something important, like finishing the Sesame Street jigsaw puzzle. But insist that it’s time for a change, get him into a nice clean diaper, and if it isn’t nap time he can get back to his floor-time adventures.

It’s Messy Down There!

Your little guy can make a mess. And that’s in more ways than one!

At the end of playtime, be firm with your little guy that he needs to clean up his toys. (But be aware that you’ll never avoid a stray Lego piece. Daddy will step on it 98.25% of the time).

But also expect that after high chair time, playing on the floor seems to be the number one source of messy diapers. If you and your little one have agreed that messes are OK (this is an important boundary question in the Little/Big relationship) then you can expect that floor time can often lead to that tell-tale scent of a stinky diaper.

But that doesn’t mean you need to change him right away. Messy diapers can create an intense feeling of being in little space. If you see that he’s deep in conversation with his plushies or lost in thought as he doodles in his book, you might leave changing him for a bit.

Being on the floor, playing with baby or toddler toys and having a smooshy bum can be a powerful combination. It will be important to change him when you see he’s getting a bit fussy. And it will be super important to give him lots of care and post-change cuddles.

But when your little guy has shown that he’s comfortable playing at daddy’s feet and using his diapers as intended, you’ll know that you’ve created a safe space for him to express who he is inside. And that safe space can have a tangible place: whether in Daddy’s arms after a diaper change, or on the floor to play.