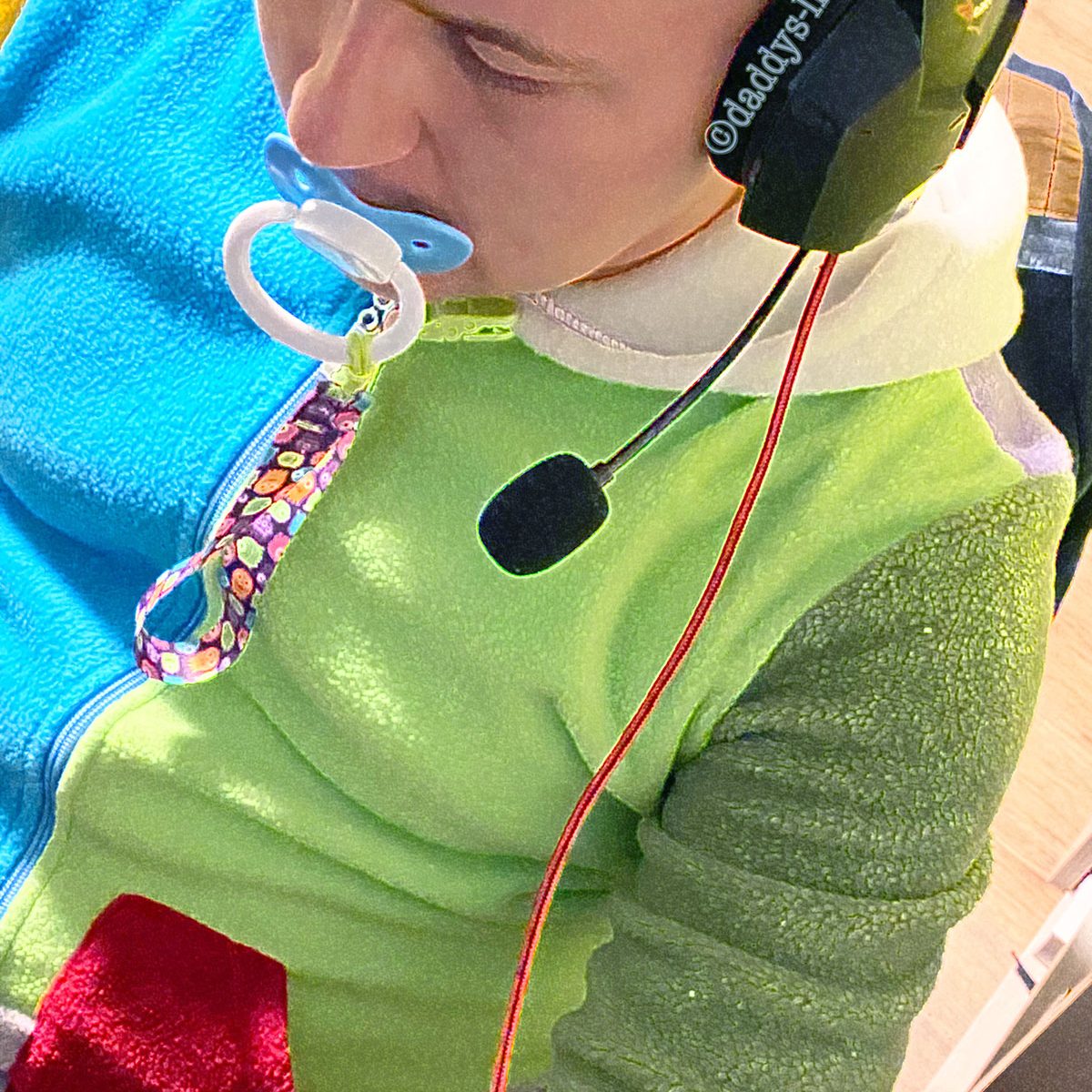 Killing zombies doesn’t seem like a nice wholesome activity for a baby boy or little one. So why would the Daddy of an adult baby or little boy let his kiddo play video games?

Because video games and diapers are a powerful combination.

Sure, it makes for an efficient gaming session. No need for breaks to visit the icky potty.

But the combination is even more powerful because your little one won’t realize that his gaming sessions are actually helping to reinforce that he truly is Daddy’s little boy and that he needs his diapers.

Before he even MEETS Daddy, he has probably spent long hours as a ‘diapered gamer’. Now, with Daddy around, you’re reinforcing a deeper form of regression. You’re helping him to feel that diapers are a natural extension of who he is. You are subtly reminding him that having a Daddy around means that he can learn to use his diapers without thinking.

And hey: for Daddy, there are few things cuter than a little guy who is so focused on something that he seems to forget that he’s an adult, sitting in a crinkly diaper and t-shirt, while his padding slowly gets more and more squishy.

Being A Baby: Barriers to Being Little

Your little one will sometimes feel self-conscious.

Maybe he’s never had a Daddy before. After you change him into a nice thick diaper with a cute babyish print he will give you a grateful hug, but he’ll often seem like he’s not sure what to do next!

His body feels tense or he seems distracted or quiet. Inside, he’s feeling a combination of embarrassment and excitement.

Being diapered in front of someone else, especially someone who is now ‘in charge’ of his diapers, will leave him with a tumble of emotions.

Or maybe you’ve been his Daddy for a long time. He can still become preoccupied with “big boy” stuff: stress at school or work. Sure, he knows he’s Daddy’s little one, but it’s hard to put aside his ‘big’ thoughts after a hard day.

He might simply feel blushy as he stands in front of Daddy after a diaper change: he looks adorable wearing just a diaper and a t-shirt (which he vainly tries to tug down to cover his crinkly padding) and yet his instinct is to run and hide!

Some ABDL boys find it difficult to use their diapers with Daddy around! They have a hard time overcoming lifelong potty habits. It takes a lot of time and help from Daddy to get used to wetting naturally.

All of these things can be subtle barriers to feeling comfortable to express his little side. He knows that deep inside he’s just a little boy or baby. But sometimes he needs extra help to feel comfortable in his own skin…and his diaper.

As a Daddy, you’re there to provide positive reinforcement and to set boundaries.

For example, you need to tell your little one that you expect him to use his diaper whenever he feels the need. When you do your frequent diaper checks, look for the tell-tale sign of a sudden flood. This means he’s been ‘holding it’.

You need to remind him that he should use his diapers whenever he feels a need. When you check his diapers and find them getting slightly more squishy each time, a simple kiss on the forehead or some encouraging words can help: “What a good boy, just a little bit more squishy!”

It’s all part of helping him to feel safe to express his little side. To accept that his (often) lifelong desire to be a diaper boy can become his new reality.

But there are other ways that Daddy can help. You want your little one to use his diapers without thinking and so….you can help him to think about something else entirely!

You watch your little one playing his game. You notice that he’s wiggling a bit.

Or maybe he even stands up and is hopping from foot to foot! He’s focused on slaying dragons but his body tells another story: his arms and hands might be twitching with each sword thrust in his game, but his lower body is doing the potty dance.

You notice his diaper change colour. You notice him blush a bit…his hand might even unconsciously touch the front of his diapers momentarily. And then his focus switches back to the game.

This dance of attention is a major reason why distractions can help a little one to increase his diaper dependence. His little mind is rapidly flipping between two things: the game he’s playing and his need for release.

In the best case scenario he’s playing a game that he’s super focused on. Sure, at first he felt self-conscious sitting on the floor, thick padding feeling comfy under his bum, knowing that Daddy is nearby.

But as he played his game he stopped worrying so much. Levelling up became more important than how much he looks like a little toddler.

With Daddy providing a steady supply of juice in his sippy cup or bottle, it isn’t long before he’ll need to go. For some little ones, wetting seems to take a lot of focus! They have to overcome lifelong habits. He might resist, squirm, shuffle his butt. Eventually he’ll be able to get some relief.

This whole process becomes easier playing a game or otherwise being distracted. He doesn’t have to THINK so much! The distraction of the game helps to make it feel more natural and less forced to use his diaper.

The other benefit of letting your little one play video games while diapered is that it helps him associate a fun activity with being a diaper boy.

The more often you can help him to associate pleasure with his diapers the better. It should be a given: “oh, I want to play a video game. I like video games. I always play video games while diapered. Therefore I really love my diapers!”

And let’s face it: video games are probably the easiest win! He likely already has a lot of experience with diapered gaming. Now you’re extending those associations to diapered gaming with Daddy around.

Which is why diaper checks are so important! Because they help to create a link between his game, his diapers and Daddy.

They can be subtle: slip in behind him and then give the front of his diaper a little squeeze. Don’t say anything. Just give him a check. His body might wiggle a bit and he might blush, but if you time it right then he also won’t want to lose focus on the boss he’s about to defeat.

It’s only when he’s super squishy that it’s time to say: “OK, time for a change baby, pause your game”.

He might moan or beg for “just another level!” but you should insist that it’s time for a change. This is an important moment of reinforcement: changing the pleasure of his game for the pleasure of a change!

As you change him, tell him how proud you are. Let him go on about how great the game is. Watch his face as the excited talk turns to a quiet blushing and sucking on his paci as you put him into a clean diaper.

It’s then that he might be realizing: “I barely knew how wet I was. I have Daddy here to change me. I really DO like being Daddy’s little boy and wow, that sure is better than any game.”

2 Replies to “Diapers, Video Games and the ABDL Boy”