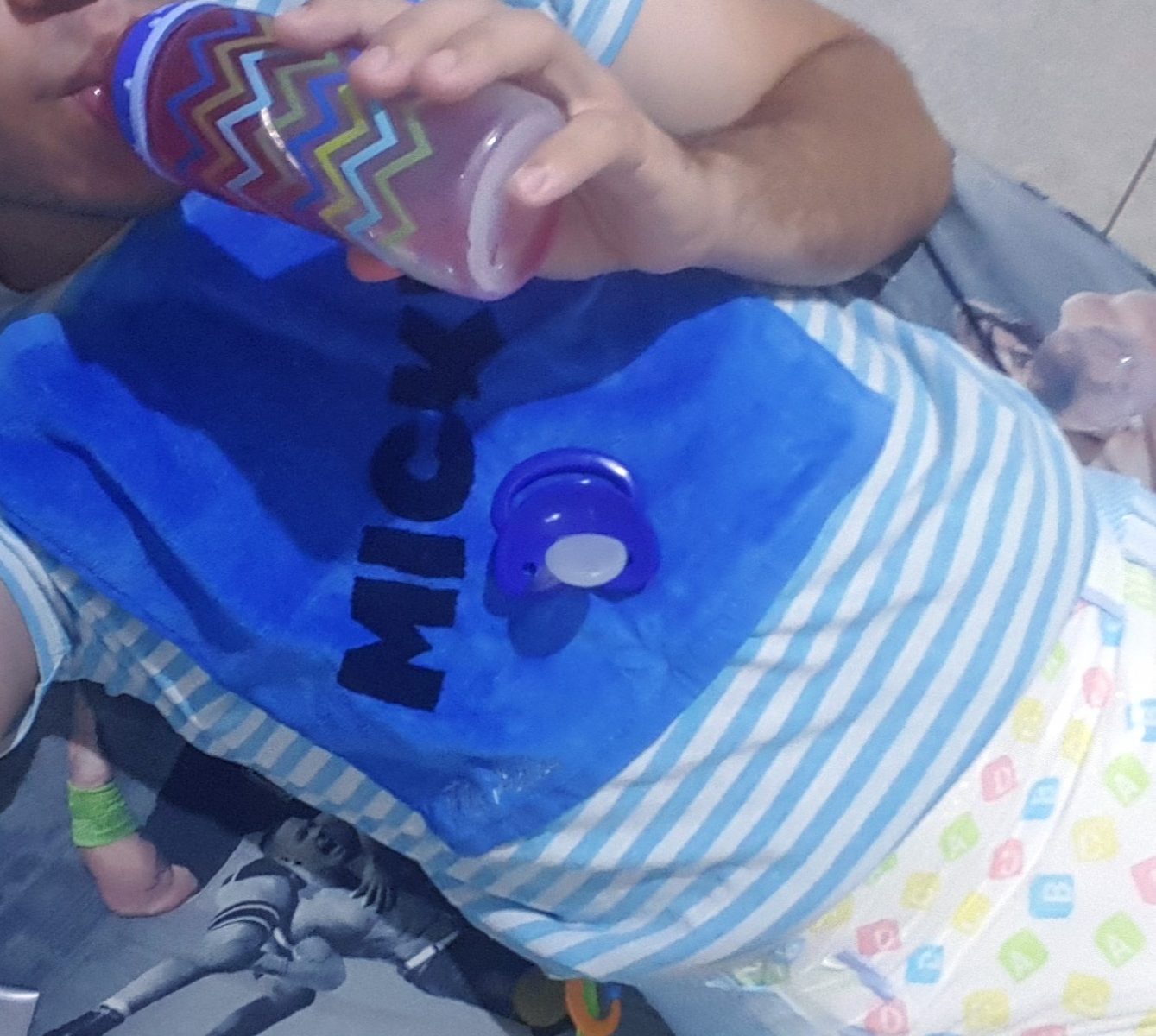 You lay your little guy on the change mat. He wiggles a bit as he watches you gather the diaper changing supplies.

You grab a thick diaper and a stuffer, and his eyes widen as he realizes that he’s about to be changed from being a squishy ABDL boy….into a thickly padded one.

And then….his hand moves up and he pops his thumb into his mouth.

For the daddy to an adult baby or little boy there’s something adorable about how your kiddo will suck his thumb, pacifier, bottle or…heck, anything that’s nearby!

But sucking his thumb during a diaper change isn’t just a quirk or oral fixation: it’s yet another signal that while he might look like an adult on the outside, he’s really just a little boy who needs his daddy.

From Anxiety to Feeling Little

Toddlers use pacifiers to help with teething. But an ABDL is, of course, an adult.

When you give your little one a pacifier, he might simply find it cute. Like a pair of shortfalls, it’s a way to help him enter “little space”.

With Daddy insisting that he use his pacifier, he’ll realize that he’s looking less and less like an adult and more and more like a baby boy. He’s realizing that there are some new rules along with new accessories.

But over time, he might also become attached to his pacifier. It isn’t just an ‘accessory’ or something imposed by Daddy: it’s part of his identity.

You’ll see him pop it into his mouth at specific times. You’ll find him madly searching for it in the couch cushions (and will make a mental note to buy him a paci clip!). His paci has become as important as his blankie or plushy.

He might grab his paci for a few reasons:

He’s feeling anxious about something. This could be stresses from his ‘adult day’. Or he might have something on his mind that he wants to tell Daddy but is afraid to bring up.

He’s feeling blushy about being a little boy. Maybe he’s not used to having his diaper changed by someone else. Maybe he’s wearing the adorable baby harness you bought him to keep him out of trouble.

Or, and the best reason of all: he’s feeling safe expressing himself as the baby or little boy that he truly is. And that’s one of those proud moments for a Daddy: when you realize that your little guy now grabs his paci as if it’s second nature, and it seems attached to his face as much as his diapers are attached to his cute butt!

Pacifiers and thumbs aren’t the only things that a kiddo will pop in his mouth!

If a pacifier helps him to deal with anxiety and embarrassment or helps him feel safe to be ‘little’, then a bottle can add a whole new dimension.

Giving your little guy a bottle you’ll watch as he happily sucks on it while he watches cartoons. His bottle gives him similar feelings as his paci or thumb.

But there’s a difference.

Because as he drinks his baba, he’ll also be realizing that the liquid he’s sucking in will soon find its way out….into an increasingly squishy diaper!

So you’ll want to make sure your little guy is well hydrated.

It doesn’t just make a good health choice (no pop in his bottle!). It also helps him get used to being a diapered baby or little boy. It encourages a more constant use of his diaper. And it helps makes him relaxed enough so that he can wet without needing to focus quite much.

Bottles of course can also be given by Daddy.

Bottle time can create a deep bond between a Daddy and his ABDL boy, something I’ve written about before.

Yes, pacifiers are cute. Choosing the right one for your little guy can be quite the task! Some boys will have several (or dozens!)

When he pops his thumb in his mouth during a diaper change, you’ll realize that he’s feeling a bit anxious and embarrassed about Daddy seeing how full his diaper is (especially if he’s a messy boy), and that he is then floating in a safe space as he realizes that he’s being properly cared for and changed.

How he uses his pacifier can be an important signal to a Daddy. Does he grab it when he’s anxious? When he uses his paci is it a sign that he’s in an especially vulnerable mood?

Or does he forget he even has it in his mouth as you head out the door to buy groceries!?

There’s nothing wrong with him walking around town with a paci in his mouth, but a gentle boop on his paci can help remind him that it’s still his choice whether he really wants that. He might be shocked to realize he even had it in his mouth, it has become so much a part of who he is!

The Joy of Being an ABDL Daddy or CG

It’s another of the amazing things about being a Daddy to an adult baby boy: you have these simple things which contain all kinds of signals and communication.

How many other people are so lucky that they can have a relationship with someone where they can gauge moods and needs so clearly.

How often can you say “I could see it on his face” and mean it quite literally….that the pacifier or bottle in your little guy’s mouth can say so much, and be another visible reminder that he needs more than something to suck on, he needs a Daddy to take care of him as well.

Members of the ABDLDaddy Crinkle Club get access to our Discord server. I’d love to hear how YOU feel about pacis, bottle time and thumb sucking! Join the chat, share photos or ask Daddy questions! When you sign up, you’ll get an email with a Discord invite.

One Reply to “ABDL Boys: Pacifiers, Bottles and Something Soothing”