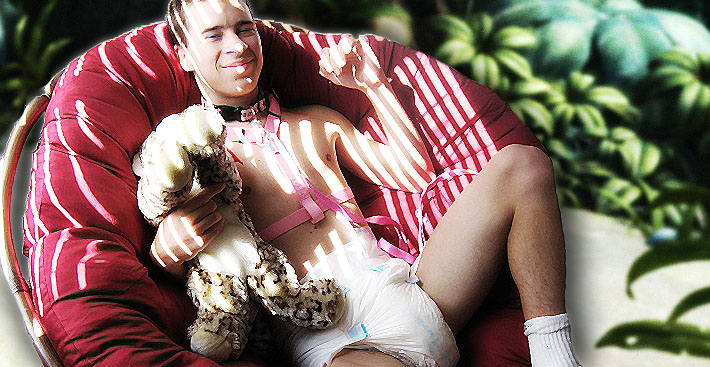 You check your adult baby boy’s diaper. It’s soaked. It has a warm squishy feeling when you give it a squeeze.

You notice your little guy turns a bit red, embarrassed maybe by the clear evidence that he has used his diapers.

It’s time to get your little one out of his soaked diaper.

This should be a dream scenario for the daddy of an adult baby or little boy.

So why would daddy sometimes be disappointed to find a soaked diaper?

One of the amazing things to me about ABDL relationships is how communication can have so many layers.

You’re both adults, of course. An important part of an ABDL relationship (whether for a weekend or a year) is to communicate as adults: to set boundaries and to try to express your needs and desires.

This level of communication helps you establish trust and understanding. And in spite fantasies about permanent regression, it will always be important to have time outside of ‘little space’ to check in.

Then there’s how you communicate as a ‘daddy’. This can include all kinds of things: from words of encouragement (“what a good boy!”) to a scolding (“no, baby, the potty is NOT for little boys!”).

But finally you will communicate with your little guy through…his diapers! They are like a secret language between a daddy and his AB boy.

Not just the diapers you choose for him (a Peekabu for bed, a Goodnite for when you send him off to ‘school’)…but also what you learn in return every time you check whether he’s wet or dry.

His diapers will tell you a story. And the difference between a soaked diaper and one that’s just a little bit squishy can tell you a lot about his mood.

A daddy doesn’t check his little guy’s diapers ONLY to see if he needs a change.

Each time you check his diaper, you’re sending him a little reminder that he’s a little crinkle butt. You’re also affirming that it’s Daddy’s job to check him and to decide when it’s time for a change.

More than likely he has had to change himself before he met you. He has been conscious of his diapers. He’s been worried about leaks. He has even worried about using up his diaper supply (even if he has hundreds stashed away).

Now that he has a Daddy, he no longer has to worry. At first, he won’t be able to help himself: when he wets you’ll see his hand gravitate to his diaper. He’s maybe worried that it’s leaking, or wants to assure himself that he really DID wet, or he wants to see how squishy it is.

You’ll need to remind him not to touch his own diapers. “No touching your diaper baby, that’s Daddy’s job”.

This is when diaper checks become another important form of communication. Each time your little might be worrying about his diaper, you’re there to give him a check.

The Super Soaker vs The Constant Wetter

So why would a Daddy be disappointed to find a super soaked diaper?

If you’ve been with your little one for a while, and if you’ve been doing your job and giving him frequent (although randomly timed) diaper checks, this is the difference between a boy who is holding it all in, or one who’s using his diaper when he needs to.

In most cases, you want your little one to become dependent on his diapers. This means he will become more dependent on Daddy. Which means you’ll be able to help him express and feel confident in being the little boy he truly is inside.

But a boy who holds it in and then lets it all out in one big flood is..thinking too much!

You need to encourage him to use his diapers whenever (and wherever) he feels a need to go.

When you check his diapers, you hope to find they’re a little more wet than the last time. This will show that he’s learning to use his diapers like he should. If he uses his diapers the moment he has the need, he might even learn to not even think about it….and be surprised when Daddy says, during one of his constant diaper checks “Someone’s a squishy bum and sure needs a change!”

When that happens, you’re on the road to a happily diaper-dependent ABDL boy. And there’s nothing that makes a Daddy happier than that!

7 Replies to “Wet Diapers and the Adult Baby Boy”