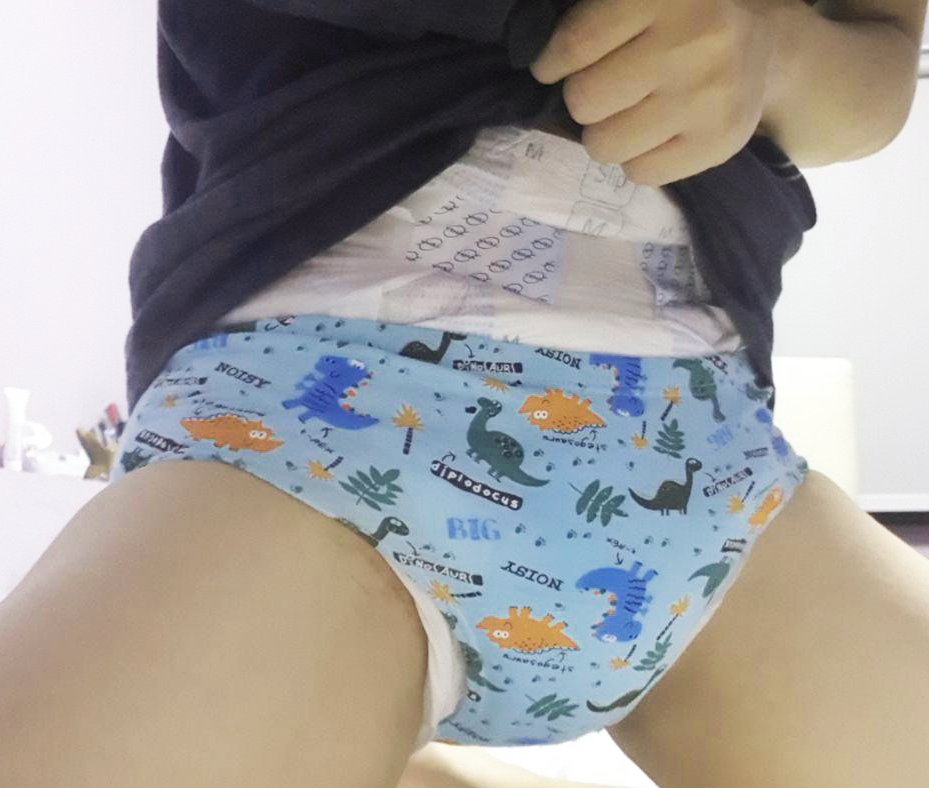 If you’re a Daddy to an adult baby boy, it might seem counter-intuitive to put him in training pants or pull-ups. Doesn’t he belong in diapers? Aren’t diapers more secure? And honestly – doesn’t he look cute in a nice thick babyish-looking diaper as he waddles around the house?

Kai recently asked if I’d do a post that touched on these topics. And I realized that even though I think most little guys should learn to accept that they need diapers, some time in training pants can be a special experience for Daddy and his little guy.

Should You Potty Train Your Little Boy?

The potty is scary. It’s cold. It makes funny noises. At night, it looks a bit like a monster.

In fact, there might be nothing scarier to an AB boy than the idea of needing to cross the cold bathroom tiles in the middle of the night to approach that porcelain monster!

He knows deep inside that it’s much better to be in diapers and snuggling with his Daddy at night instead. The potty is icky and it’s better to be safe and secure.

As a Daddy to an adult baby, you’ll usually want to reassure him that he doesn’t ever need to worry about that evil beast. The potty is not for baby boys! He can feel safe knowing that he doesn’t need to figure out that strange object in the washroom.

And so usually your little guy will be in diapers. He’ll sleep soundly, cuddled by Daddy or in his crib. He won’t have to worry about potty breaks when he’s at ‘school’ or playing video games at home.

But sometimes it’s a good idea to help your little guy test his boundaries and to help to reinforce his dependence. And strangely enough – that’s where training pants or Pull-Ups can play a role!

Pull-Ups are The “In-Between” for the ABDL

I talk a lot about the fact that an AB is both an “A” and a “B”. That is especially true when you’re setting up boundaries and deciding where the dividing line is between ‘little space’ and regular adult life.

But there’s another side to it as well: as a Daddy, you’re helping him to feel safe and secure, and to allow himself to let go of some of the usual adult rules and roles.

Diapers are the biggest symbol of giving up some of those adult rules and roles. By accepting that Daddy will keep him diapered, he’s allowing himself to be more secure as a baby boy who needs attention and affection.

You’re helping him to regress into a place which is warmer, more loving, and vulnerable.

He might struggle sometimes, feeling like his ‘adult side’ is telling him that he shouldn’t be watching cartoons, drinking from a bottle, or being fed from a high chair. When he returns from work or school, he might know he has no choice to be put in a clean diaper, but it might take him some time to leave the more adult world behind and be a bit moody or fussy.

These are all “in-between” spaces: they’re part of his internal dialogue between being big and little.

Pull-Ups and training pants are also an “in-between” space. They’re a dividing line between more babyish and ‘bigger’ boy feelings. And as your little guy struggles to show he doesn’t need to be treated like a baby – he might instead be reminded that he actually does!

OK, so I’ll admit I have way more experience keeping boys in diapers than training pants! I don’t remember ever putting a star on a potty training chart! (A ‘diaper training chart – that’s a whole different story!)

But the point of putting your little guy in training pants his to give him a chance to show Daddy whether he’s a big little boy! To make Daddy proud. And to also let Daddy comfort him when the experiment ends in failure.

Don’t surprise your little guy. This might actually be a boundary for him! Some ABs refuse to even think about training pants or the potty, and it’s important to be sure he’ll accept this new element in your dynamic.

It can help to buy some with him when you go shopping. Take him out to stock up the nursery and when you do, tell him to put some Pull-Ups or Goodnites into the shopping cart. You don’t need to say why, but you’ll be able to gauge his reaction to the request.

Buy a few and leave them where he can see them. If he asks about them, you don’t need to respond right away. You can just say “I thought they were cute!”

Can You Be A Big Boy?

Training pants or Pull-Ups are a chance for your little guy to show Daddy he can be a ‘big boy’. And you should frame it like that: “Can you be a big boy for Daddy? Let’s see if my guy can keep his pants dry!”

He might give you a doubtful look. He might wiggle a bit with excitement. Make sure you show him the cute patterns on the Pull-Ups, Goodnites or training pants.

But it’s important to establish some rules. What does “being a big boy for Daddy” mean? Are you going to encourage potty training? Will you have a potty training chart?

By setting down some criteria, he’ll know the rules. He’ll know whether he’s succeeded or failed at being a ‘big boy’.

Big vs Baby: The Fight!

Training pants are an ‘in between’ place. They’re a chance for him to wrestle with how much of a baby he is. It will let him explore his feeling around whether he can ‘hold it’, whether he deserves to be treated more like a baby or more like a little boy.

You’ll see it in how he wiggles a bit as he plays video games, the padding of his training undies a lot thinner than his usual thick diapers.

One of my favourite authors, StoryTime on Diaper Bois, describes the moment:

Wiggling in his chair as he kept playing he felt a drop sneak out. He pushed the controller down hard and grimaced. He stood up so that he could do the potty dance to hold it longer. He saw that the spot had grown a little, and was starting to snake down to one knee, but he hadn’t lost control. The level had to be ending soon and he was going to finish it!

Dancing made playing the game much harder but he was so close to the end. Then he would go to the potty and pee like a big boy. He felt another spurt leak out but just pressed his legs together and kept playing.

Needless to say, Spencer’s Daddy has the boy in diapers soon enough. The experiment in being a ‘big boy’ ending in failure.

Regardless of how your experiment with training pants goes, the important thing to remember is that he’s always your little boy.

Reassure him. Even he DOES keep his undies dry, tell him how proud you are that you’re his little boy!

And if he DOESN’T, I don’t think either one of you will complain if he’s back in diapers within days (or hey, within hours). And maybe next time you can simply get more creative when it comes to trying out ‘big boy undies’.