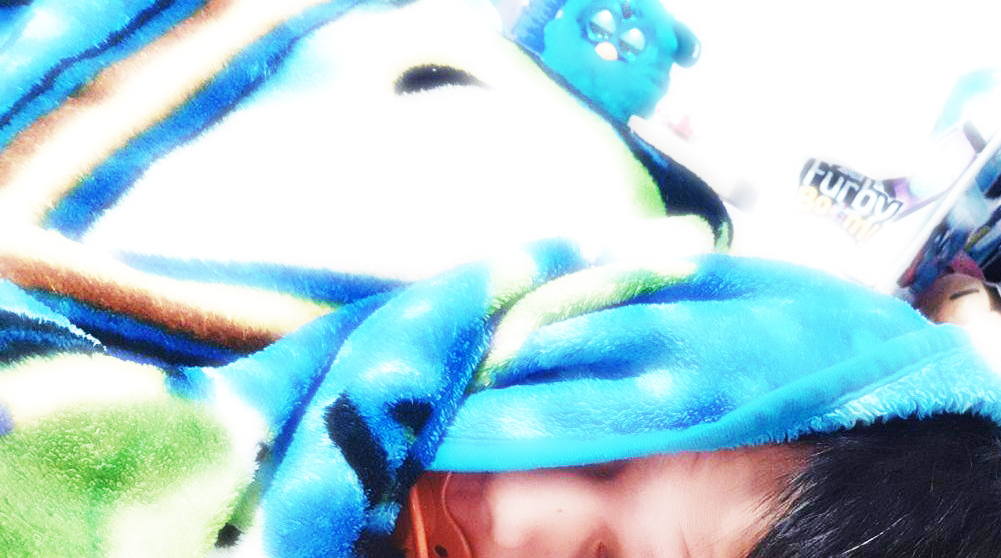 You’re cooking dinner and your adult baby boy wanders into the kitchen, paci in his mouth, diapers crinkling loudly under his shortalls.

In his right hand his favourite plushy. And in his left hand he holds his blankie, which drags slightly along the kitchen floor.

You think for a second about telling him to be careful – his blankie will get dirty! But then you realize you’ve told him before, and nothing you say can seem to stop him from dragging it around like Linus from Charlie Brown.

Adult Babies and Their Blankies: Everywhere!

A blankie often seems like an extension of an adult baby or little boy’s body. Like it’s permanently attached to their arm. Many babies take their blankies everywhere!

They drag it around. They hold it along with their plushy while they watch cartoons.

They snuggle against it as they sleep, and hide underneath it when they get all blushy.

Babies will cover their head with it when daddy changes their diaper, especially if they’ve made a messy!

They’ll sit on it, smell it, even kiss it sometimes.

And so understanding a boy’s attachment to his blankie is an important part of being a daddy.

And there’s some truth to that: adult baby and little boys want to feel secure, to feel safe, to know that it’s OK to be little.

Blankies, pacifiers, plushies: all of them are like secret weapons to a super hero! They give your little guy amazing powers! (The main power being the ability to turn a dry diaper into a wet diaper in about 2 seconds flat!)

There are all kinds of ways that a daddy can help his little guy feel the power of being himself: from tucking him in at night, to making sure his shelves are stacked with diapers, to choosing toys that are appropriate to his ‘little age’.

But then there’s a special class of things: the items that your little guy forms a deep attachment to. Where he might even panic if he can’t find them!

For most boys, his pacifier will be one of those items.

Have you ever been faced with a little guy who has misplaced his pacifier? It’s one of those moments where a daddy really needs to stay calm, cool and collected!

For many boys, misplacing his blankie is another of those things.

It’s something that he forms an attachment to that goes beyond the box of Legos in the corner of his room, that’s more important than his bottle, that he feels lost without.

Touchstones and The Senses

I think blankets in particular can be a touchstones, an item with superpowers, that helps an ABDL to be immediately brought back to, “little space”.

One of the reasons for that, I think, is that a blankie can touch a few senses.

Usually, a blankie is soft and cuddly. Just feeling it against his cheek, for example, reminds him that he’s just a baby, that he’s surrounded by soft and gentle things.

Then there’s the smell. Maybe he’s had his blankie since he was a little kid, and it’s nothing more than a few threads. And yet its smell can instantly transport him in time, back to a place of memory, childhood, and often safety.

The blankie might be somewhat new. And yet it still has a lingering smell of baby powder. Or maybe it even has a faint scent of daddy from the last time you cuddled your baby boy, his blankie on your chest as he nuzzled against you.

All of these sensations, of touch and smell and texture, help to evoke memories and associations in a more powerful way than, for example, his bottle.

And because of all of these associations and senses, his blankie helps to keep him connected to his ‘little side’.

After a day out being a ‘big boy’, the first thing he might do when he returns home is grab his blankie and his pacifier and flop down on the bed while Daddy chooses his diaper for the night.

The pacifier soothes him, and his blankie can instantly help him associate with thoughts of being babyish, a little boy. He knows that with his Daddy and the secret weapon which is his blankie he’ll be back to being a baby superhero in no time at all.

One Reply to “A Blankie for the ABDL or Little Boy”