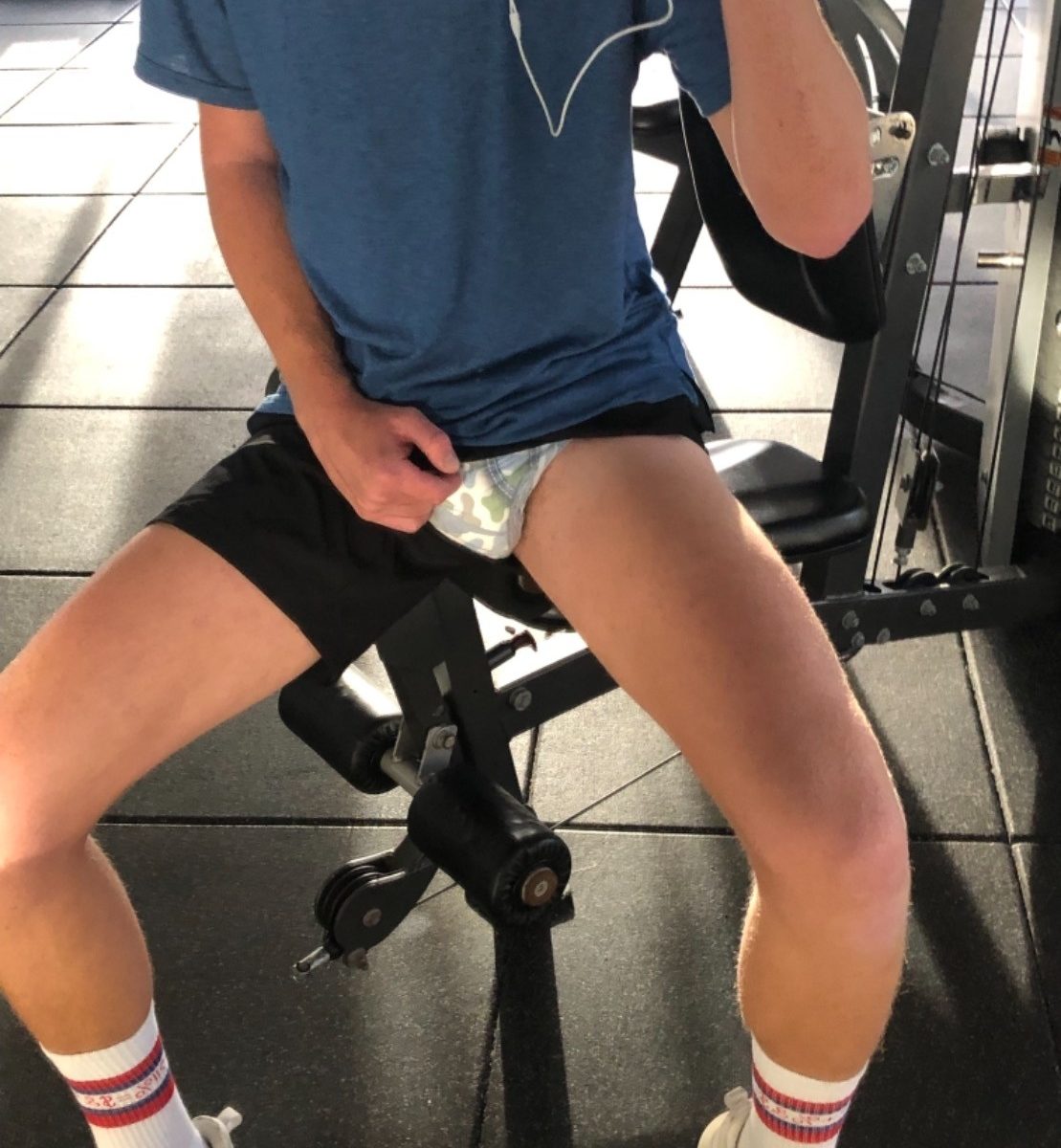 Daddy has a big decision to make when his adult baby or diaper boy is planning to head off to the gym.

It’s one of those moments when you realize that one of the joys of being with an ‘AB’ is that he’s both an adult and a baby. And you get to decide together what the boundaries are.

The same is true for being a Daddy to a diaper boy – he needs to be reminded that he needs diapers, that he needs someone to make decisions for him, he needs the protection of padding and his Daddy.

He might not be a ‘little’, but he still needs a Daddy – and someone to keep him diapered.

But you also both need to agree on what the limits are.

Some boys aren’t ready for diapers in public. Or maybe he’ll accept diapers under his jeans when you go to a movie – there’s less chance of being noticed, and the movie theatre gives at least the illusion protection because of the darkness. (It doesn’t hide the crinkle sound however!)

It’s up to daddy to understand and help decide on your shared boundaries. You need to decide together on what your ‘hard limits’ are.

But once those are set, it’s up to Daddy!

Your diapered boy might blush when you choose out shorts for him for a trip to the park, or when you decide that NO, those jeans are NOT too tight for grocery shopping (and you can hardly, barely notice the diaper bulge, no really!)

You might decide together that babyish clothing is a no go in public, but eventually he lets Daddy choose. And he finds himself wearing cartoonish t-shirts or overalls outside.

Diapers at the Gym

But what about diapers at the gym?

It’s a much more public space with much less room for hiding and a constant possibility that someone might notice (or at least wonder why the guy on the weights next to them seems to be making some sort of crinkle sound).

I’m sure everyone will have their own opinion. And each Daddy and his little/DL will need to decide.

I’ll start by saying that I don’t think strangers should be put in a position where they might be forced to deal with other people’s fetishes unless they should have clear reasons to expect it (a Pride parade, a fetish club night, etc).

I don’t think someone should lead their naked puppy down the street for example, unless it’s Folsam Fair. 😛

But I also don’t think that wearing diapers to the gym is forcing a fetish on anyone. Some boys need diapers. It’s who they are, and it’s just as valid as if the need was a medical one (and sometimes it IS a medical one).

So sending your boy to the gym with diapers under his shorts can help enforce that he needs his diapers, he’s safer in diapers, and he needs his Daddy to make sure that he’s always protected.

But I think sending your little one or DL to the gym in diapers has an added advantage.

Because ‘working out’ means working on being a fit, healthy man.

But the padding under his bum, the slight crinkle his diaper makes, and the way his diaper warms up when he wets will remind him of who he really is.

Unlike the other men around him, he’s in a diaper.

And he’s in a diaper and it’s for a reason: he needs them, and he feels best when he knows that Daddy is always looking out for him.

He might be alone in a room full of jocks, but the padding under his shorts is like having his Daddy right there beside him. It reminds him that no matter what the world sees, he’s still Daddy’s boy in diapers.

Now, I realize that not all little ones will even go to the gym!

In fact, I’m grateful for – the Internet! For giving me such inspiring material! I love Miami ABDL in part because his photos rock (check him out on Tumblr or ABDL Link) – but also because we both seem to enjoy sailing and because he projects such a positive comfort with being a diaper boy. (And he’s just too darn cute for words).

So, he inspired this post and my thoughts on diapers at the gym.

But what about you? Have you ever worn diapers to the gym? Would that be a limit for you with Daddy? What about other places?

Drop a comment below. And a big thanks to MiamiABDL for permission to use his photos!

4 Replies to “Diapers at the Gym”