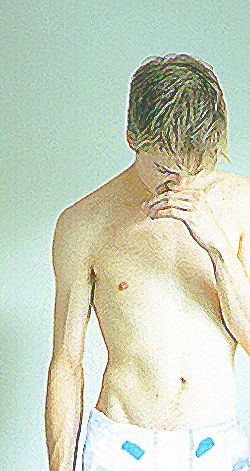 There’s a lot of joy in being a daddy to an adult baby or diaper lover. There’s a sense of trust, commitment, bonding and love that is rare to find.

It’s even more rare to be able to care for someone in which there are so many ways to express your feelings.In what other relationship do you have such tangible ways to show your care and affection?

A diaper change is a reminder of the special trust an adult baby is placing in his daddy, and a way for daddy to show that he’s there for his little boy.

A hug and a pat on a diapered bum as a son heads off to school will carry him through the day, a little reminder of how much he has his daddy’s protection and care.

The Adult Voice
One of the things that’s amazing to me about an adult baby is that there’s both an “A” and a “B”. This doesn’t mean he’s two different people – when I look at an AB I see both the little boy and the adult.

He doesn’t switch from being an adult to a baby, there are just varying degrees to which the different sides of his feelings are expressed.

But as a daddy, you might feel concerned while caring for him when it seems like the ‘adult side’ is at war with the little boy.

I found when looking after someone, that there can come a time when they express resistance, frustration, or a sense that their interest is changing or maybe even waning.

For an AB who has never been cared for over the long term, this might seem strange – why would a little guy resist the feelings of being totally cared for? Why would he feel less happiness when it’s time to have his diaper changed?

But this feeling of resistance can happen not because you aren’t expressing your true self, but because the lessons from culture and society are hard to release.

Often, these moments aren’t big monumental things – it’s just a slight shift in feeling or attitude. And what’s happening isn’t that the “adult” is fighting the “baby”, but is instead the weight of everything he’s learned from society and growing up.

Providing Assurance and Support
It’s important to realize that as a daddy, you have an important role to play: you’re not only there to diaper and dress and care for your little guy, you’re also there to give him a positive sense of self-worth in a world that judges too quickly, that trains people in more ways than just using the potty, and that places a special premium on independence.

There will be times when your son needs to know that he’s valued as an adult too – that you respect his imagination, thoughts, feelings, and place in the world.

While he has given you a gift of relying on you and being dependent on you, there will be other times when it seems like he needs to assert his independence because that’s what society teaches us as we grow up. This can happen in all kinds of ways – resistance to being babied, or maybe just being fussier than usual.

These are natural turning points. While the little boy he is inside needs a safe place to express itself, society has taught him that independence is important.

The Gift to the World
It’s at times like this that a daddy needs to remember what a special gift an adult baby brings to the world.

You need to remind him that his vulnerability, willingness to be cared for, imagination, and tenderness are like lights in a dark night.

After diapering and changing your little guy, snuggle him closely. And speak to him softly. Tell him how proud you are of his courage. Tell him how much the world needs little boys like him. Tell him how your life is better because you’ve been given the gift of a little guy whose imagination and dreams are inspiring, and how honored you are to be able to protect that amazing spirit.

These are important turning points. They’re the times when a son needs his daddy to remind him of what his dreams were: to not stop being an adult, but to let his little side shine through, express itself, and to always remember that no matter what the world might say, he’s a very special person for being an amazing baby boy.

And through these turning points, you’ll find that a daddy and his little boy don’t just become closer, but the expressions of caring grow deeper and more meaningful, in ways you may never have expected but which are richer rewards for both of you.

6 Replies to “Caring for the Adult Baby: Turning Points”