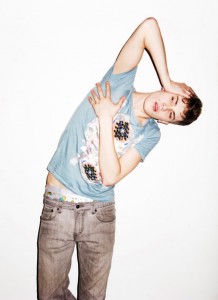 Marzipan bananas are not real bananas. Swedish fish are not actually fish. It’s not dairy just because milk chocolate has the word milk in it.

Now, you probably thought you had a pretty good grasp on the world. Meat, vegetables, and dairy. How gravity works. That people live in houses or apartments.

But then you become a dad to an adult baby and you’re reminded that there are, well, alternative ways of looking at the world. And it can be tough to maintain the boundaries of good common sense when you have a little one running around.

I mean, a quick test for your dads out there:

– Why don’t more people live in tree houses? If there aren’t enough trees, why don’t we plant more?

– Why can’t you have grass inside instead of carpeting? Isn’t carpet hard to maintain? Shouldn’t EVERY home have an indoor sprinkler system?

– Since chocolate cake has plenty of vitamins, minerals, eggs and milk, shouldn’t it therefore be classified as a separate food group?

– Thinking about getting a new chair for the living room? Why can’t you get a tire swing? (Hint:  “that’s not practical” doesn’t cut it.)

Adult Babies and Imagination
There are so many special things about the relationship between a dad and ‘son’. Tenderness, care, affection, trust, and the deep connection that comes from being there for a little one.

But one of the truly special things is what can happen if you’re able to create a sense of safety, fun and play.

Something as simple as putting your boy in a playpen with his stuffed animals or some toy blocks might seem, to some, like you’re restricting him in some way, ‘penning’ him in. But what you’re really doing is creating a space for imagination. As an adult baby feels the security of his playpen and senses your love and attention with every crinkle of his diaper, he’ll start to drift into play. He’ll find himself lost in something that seems simple – playing with his stuffed toys, for example.

By both diapering and dressing him, and by giving him a safe, contained place, you’ve created the space in which he will start to open up his feelings, creativity and imagination.

In today’s world, as we run from errand to errand or class to class, there isn’t always room for imagination. The hours you give your little guy to just sort of float and dream aren’t just about caring or ‘daddying’, they’re about giving him permission to play.

Curious Boys
But don’t be surprised as time goes on if the adult baby in your life starts challenging your OWN imagination!

And this is one of the true joys of being a daddy.

When he starts asking why the sky is blue, when he tries to convince you that there’s nothing wrong with living on candy, or when he proposes that you build an underground fort in the backyard, you’ll find that what seem like reasonable responses just don’t cut it. You’ll need to fire up your own imagination in response.

By the way, the answers are as follows:

– More people WOULD live in tree houses, no question. But you need to get a permit from the monkeys, and the paperwork is very difficult to fill out.

– Grass is an excellent indoor carpeting. But no one has invented a welcome mat to use on the way OUT. Once that’s invented, for sure most people will get rid of their carpets and use grass instead.

– Chocolate cake IS a food group, but only on birthdays. It was decided because otherwise instead of birthday cake, you’d be blowing out candles on a piece of liver. And we don’t LIKE liver do we?

– A tire swing is a great idea for the living room, but then we’d need to get a new television set that swings in circles so that we can still see the picture as we swing around. That’s a good idea but makes it really hard to change the channel.

And P.S. – the boy above is trying to prove that his brain will drip out of his ear if he bangs the side of his head enough times. What he doesn’t realize is that the brain consists of 97% water, 2% brain stuff, and 1% anti-gravity powder.

11 Replies to “Candy is Not a Food Group, and Other Lessons from Adult Babies”