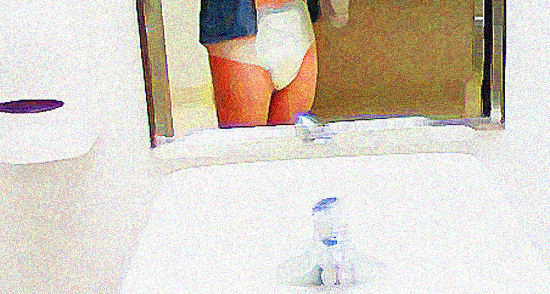 I’m sometimes asked whether I’d change an adult baby/little boy in a public restroom. The idea that a diaper lover or AB might be changed in public places is an important question – and it can really strike to the heart of whether someone would be able to integrate the fact that they wear diapers into the activities of life.

If daddy has you in diapers and takes you to the movies, for example, what happens if you wet? Clearly, if you’re daddy’s diaper boy you probably should be using your diapers like you’re supposed to, and over time you may not have any choice – it can become harder over time to hold it as you get used to wearing and while you might not be incontinent, a boy has to go when a boy has to go! But does daddy wait until you get home to change you?

Like most of my feelings about taking care of a little guy, my answer is that “it depends”. It can take time to build trust and acceptance and your first time in a diaper in public with daddy might feel scary and he might keep you fairly close to home so that you’re able to slip back to the safety of the nursery for a change.

For others, the act of being in public is an important part of allowing them to feel like the little boy they are and the idea of being changed in a public place can act as a powerful reminder that yes, they really do need their diapers, and they have a daddy to take care of them.

Natural Embarrassment
I’m not a big fan of intentional embarrassment or humiliation. I don’t believe that negative feelings are a solid foundation for the long term exploration of being a little boy or diaper wearer.

While I know some little boys desire it, I’d never force someone into a humiliating situation. Humiliation, pain, and discipline might seem like or even BE a sure way to trigger more immediate regression.

But it’s also my belief that caring for a little guy isn’t about regression really at all – it’s about uncovering and revealing the little boy or baby inside who is always there, and is a natural part of someone’s personality. Humiliation is a little like a parlor trick – it might fool you into stripping away defenses for a short period, but it isn’t a long-term strategy for letting a little guy feel comfortable in being who they are, especially if it’s done in a way that manipulates feelings.

But humiliation and embarrassment can happen when they arise naturally. And these are important moments between a daddy and son.

Something as simple as coming to the sudden realization that when he leaned down to choose a teddy bear from the toy store shelf his diaper clearly showed over the top of his jeans, or noticing that someone on the street gave a quizzical look at the overalls he was wearing as if they were wondering why an adult would have an Elmo patch on their clothing – these feelings aren’t forced, controlled or unnatural, but something that happens in the natural rhythm of just life as a baby boy.

The Diaper Lover and Older Ages
While those are general rules, I’ll continue to say “it depends” because there are a few exceptions.

For someone who’s a diaper lover, the dynamic is quite different. There are lots of guys out there for whom the diapers are the key part of their dynamic with a caretaker, and they are comfortable with their ‘calendar age’.

For the diaper lover, wearing in public can be a really critical part of the experience of being in someone’s care. Having their diapers brought to the attention of others can heighten the experience and a daddy might even say things in public, ask if their diapers are wet, or do other things to signify that he’s clearly in his care.

But my perspective is that of a daddy to adult babies and little boys. And as such, there are other exceptions, including caring for someone who expresses themselves as a boy who is well past potty training age and should, by most measures, be out of diapers and past accidents.

With these boys, a daddy might even have initiated potty training or moved the boy into training pants or Pull-Ups. My approach to potty training or dealing with a boy who is at the cusp of avoiding accidents is probably the topic of another post, but it’s enough to say that the language, gestures and actions with these little guys can be different, including the ways in which you deal with an accident in public.

Wearing Your Diapers in Public
But back to the little guy at the movies. You’re the kind of boy who needs diapers and are probably a long way off from ever being out of them (if ever).

Your diapers are an important expression of who you are, and the fact that you need daddy to diaper you has become a natural part of your life. You’ve come to the point where you don’t question that you should be in diapers. The diaper checks and changes that daddy gives you are filled with a feeling of acceptance, trust and care.

Daddy never gets tired of taking care of you because he knows first that this isn’t a question of choice: your diapers are part of you, they’re YOUR diapers, and you need them. He also knows that they are a powerful expression of your love and need for him, and this gives him a wonderful feeling of having an important place in your world, one which he’d never want to risk losing.

In this context, when you wet your diapers at the movie there’s no inner voice telling you that it doesn’t feel right. The safe and accepting feelings you have make using your diapers an almost instinctive reflex.

Sure, you might still blush a little as you feel your diaper grow warmer with the spreading feeling as you wet, but this quickly passes into a feeling of ‘rightness’ and maybe even pride – you know that daddy will be proud of his little boy for just being who he is, which includes being a boy who wears diapers for a good reason.

Leaks and Changes
Now, if at the end of the movie you stand and daddy notices that your diapers have leaked a little, this is an important moment. The wet patch along the inside of your leg or on your bum probably isn’t that noticeable, but you might blush with embarrassment or wonder if others can see.

But daddy doesn’t do anything to humiliate you, scold you or make you feel bad. He might be MENTALLY making a note not to let you order the super jumbo pop next time (too much sugar for a little guy is more of the issue in any case). But mostly he acts as if it’s natural and that these things just happen when a little boy is in diapers all the time.

He calmly notes the issue, and says quietly: “Looks like my little guy has a bit of a wet bum, better get your diaper changed.”

As he walks you to the restroom, he might place a hand gently on your shoulder and walk slightly behind you. While you realize this doesn’t prevent people from seeing the leak in the seat of your pants, it gives you a reassurance that you’re under his care and somehow daddy will make things right.

He’ll either find a family restroom or a large stall or, failing that, will find a reasonably quiet corner. Quickly and efficiently he’ll lower your pants, remove your diaper, pull a new one from the diaper bag, and help you into a new one. He might pat your bum dry with a cloth the best he can or, if it’s a real soaking, he may have a change of clothes on hand.

Public Reaction
Now, this may sound like a fantasy or it may sound embarrassing. And probably the first few times it might be, although it probably is less likely to happen until you’ve come to that safe feeling with your daddy and you’re comfortable in both the feeling of being his little guy and in using your diapers naturally.

But my experience has been that changing someone rarely elicits much more than sympathy or embarrassment amongst OTHERS.

I’ve changed a little guy pretty much in the open in a public restroom because I had no choice. The few people around seemed to feel more embarrassed THEMSELVES as if they had stumbled on something that they shouldn’t have seen – and really, they were right in some ways.

Diapers need to be changed for people of all ages. And acting on the reality that it is natural and needed creates its own kind of safety.

While some people might never want to be changed in public, for most little boys who have grown into an accepting feeling of who they are, the diapers they wear, and the care they need, that final pat on the bum following ANY diaper change is a final simple reminder that they are loved and that they are loved for who they are. And there’s nothing humiliating about that.

30 Replies to “Changing an Adult Baby’s Diapers in Public”