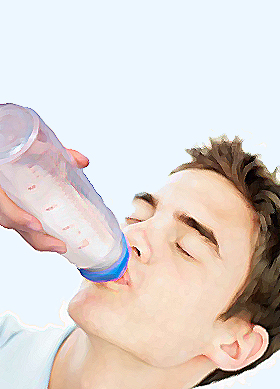 Settled on the couch, you lie back across daddy’s lap and he cradles you with one arm. Already a sense of stillness comes over you, no matter what came before. You’re about to be given your bottle, and there’s a warm sensation of being cared for and relaxed which makes this a very special moment of the day.

Wherever a boy might be on the spectrum between a true adult baby or a pure diaper lover, most will find something satisfying in being given a baby bottle by a dad. Whereas some ‘boys’ might not be caught dead in a onesie or sleeper, bring a bottle to their lips and they’ll suckle happily and their eyes will drift away slightly as they drink their milk or juice.

For a dad to adult babies, bottles are an important part of helping someone to find those special inner feelings of being little.

Whether it’s cradling a little guy in your arms and gently bringing the bottle to his lips, or simply placing a bottle beside him as he watches cartoons and then getting a big grin as he almost absently grabs the bottle and takes a slurp, a bottle is affirming and is yet another gesture of care and love from a dad to his son.

Sure, there are sippy cups, and for some boys who feel a little older or for more practical reasons, sippy cups are a must have in every dad’s cupboard.

Feeding the Adult Baby
But there’s nothing that compares to having a bottle in your hand and bringing its nipple to the lips of your little one. At first he may blush a little as if he feels a little awkward to be fed in such a babyish manner, but even the ‘biggest’ of boys will eventually succumb to the soothing rhythm that’s so unique to being bottle fed.

A bottle lets them truly sense and feel the cool juice or the warm milk as they suckle it – the need to focus and draw out the liquid, the feeling of it on their tongue, and the trickle as it enters their throat bring a sense of presence to something as simple as having a drink.

This rhythm helps him to sort of float – thoughts become less specific, his mind drifts, and he shifts into a state that’s more about feelings than thinking, more about being a little boy than the adult who needs to take care of his own needs.

With his dad’s arm cradled around him, he feels comforted and cared for, and he may sort of gaze at his daddy and truly feel how much trust and security he has in his world. He will feel or sense that his dad is giving him permission and gentle attention to live in the wonderfully pure expression of being a baby boy.

Diapers and Naps
As he drinks his bottle down and the sensation of suckling puts him into a gentle rhythm, other feelings will also emerge: the feeling of milk dribbling down his chin, the almost helpless feeling of limbs which have gone slack with relaxation, and the gentle rustle of his diapers as his dad rocks him ever so slightly.

Bottle feedings are often one of the times when wetting his diapers comes the most naturally. With his mind floating from feeling to feeling, he may not even quite be aware of the release until he feels the warm spreading sensation as he wets his diapers, sending a little burble of pleasure through his tummy.

Often, the little guy will finish his bottle with a slight nod into a nap, as if the comfort, cradling and babyish feelings weren’t just about having a bottle, but were more like providing a dreamlike sense that the world is warm and gentle, right here, as he fully drinks in the sensation of being a cared for baby boy.

18 Replies to “A Bottle for the Adult Baby”