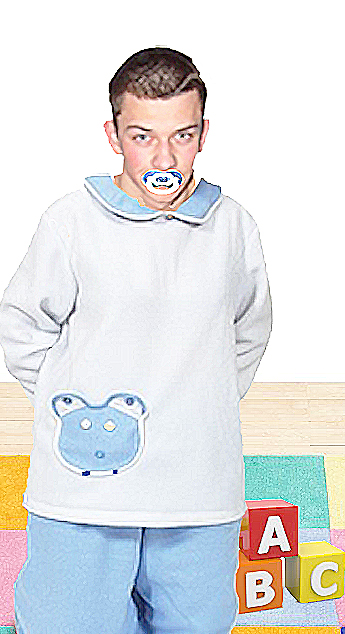 I’ve had questions about what a daddy would do to help a little guy regress, and although I write a lot on this blog about what I’d do to try to give a little guy a safe, trusting and caring space in which to express his little side I realize that the question is, in some ways, more specific than that.

Now, you’ll have to excuse me if I ramble a little here because this is a topic that is hard to express in words. Regression has so many different sides to it, and maybe it’s more appropriate for the dads out there to think through.

Becoming Baby
The first thing about regression is to understand that the sense of being an adult baby is different in different people.

For some, they may be primarily a diaper lover with some tendencies towards having a caretaker.

In a previous post, I mapped out the different types of adult babies and diaper lovers. These would be the boys who respond more to feelings of being under control than pure regression.

Maybe you’re the kind of boy who has always loved his diapers and doesn’t mind having a play date with someone else who feels the same way. Maybe your thoughts of being with a dad is more about having someone who provides a sense of guidance, control and authority in your life.

It’s less about being a little boy and more about the feeling of being safer maybe when you have someone you can look up to. For these guys, having a dad who babies them or treats them like a little boy is about expressing feelings between the dad and the son. Being dressed in toddler clothes might give someone a tangible way to feel the ways in which they can state their “littleness” to the older figure.

Being Baby
On the other hand is the little guy who really feels like he IS a baby boy or toddler inside. And those are the boys who will often ask me about how I’d handle their sense of regression.

For these boys, having a daddy is all about being able to express their true selves. They need someone to change them, cuddle them, bathe them and feed them not because they have a desire to express a certain feeling to daddy, but rather because that’s who they ARE.

This is what I would call an Adult Baby in the truest sense, as compared to someone who is ‘playing’ an age. There’s a side of them which has probably always been and probably always WILL be a baby or toddler.

But there’s still an “A” in AB. There’s still an adult who enjoys a good book, or listening to adult music, or eating out at a nice restaurant now and then.

There are adult babies who would love nothing more than to leave ALL of that behind. Leave behind school and jobs and become a true baby. This is regression of a different order and the subject of another post.

But for the AB who still has adult things in his life, or even for one with very few, there is still the concern about not always being in that ‘littlespace’ that is so needed. So the question is: how do you help a little guy when big thoughts appear?

Flow and Direction
My first belief is that the human spirit works better through a sense of flow than force. The baby spirit is like a river – and I don’t just mean wet. 🙂 I mean that the sense of emotions run through a little guy’s mind like water – flowing, swirling, moving, with an occasional obstacle along the way in the form of adult thoughts.

As an adult, we are trained to ‘control’ our emotions. One of the theories of regression is to use that very adult training to ‘control’ a little guy back into the sense of being little. My personal belief is that this only works in short bursts.

To give someone a truly safe place where they can express their inner feelings, you need instead to help him to flow over those rocks in the river of his emotions. This is a better strategy in the long term, because rather than using his ‘adult instincts’ to tap into child-like feelings, you’re taking the approach of retraining him in child-like feelings.

It may take longer to get to the same result, but if you use control then his adult-type instincts of resistance will continue to ‘kick in’.

If, on the other hand, you remove those instincts of controlling feelings as an adult would, he’ll eventually very naturally arrive at a more child-like place.

Creating Space for Flow
So what does a daddy do to create that sense of flow?

I write on this blog a lot about all of the sensations that are important to put a little guy in a receptive space, whether it’s the softness of touch felt in a cuddly sleeper or daddy’s warm hands rubbing a little boy’s back; the crinkling sounds of diapers, plastic pants and crib sheets; or the smells of powders and lotions.

The sense of scale is important as well: a crib that is properly proportional in size for an adult baby but still looks like a true crib; large bottles for feeding and the nipple on his paci; having him sit on the floor so that he feels smaller; larger sized furniture or toys.

But true flow will come through the creation of rhythm and ritual.

In psychology, when someone is in “flow” they are in a place where their sense of time changes because they become present in the moment.

This can be triggered through games and play and through how daddy sets a pace and rhythm – the slow gentle time of a bath or story; the careful attention of feeding a little guy in his high chair; or the long quiet chat on the floor of the blanket fort between daddy and son.

Ritual is also important just as it is for any little boy. Even a ‘true’ toddler has difficulty being in a ‘perfect space’ – they don’t WANT to eat, or go to bed. But rituals reinforce appropriate feelings.

Making sure that bed time follows the same pattern each night, that diaper changes have consistent actions (clean, powder, tape, a kiss on the tummy and a pat on the bum), that baths are usually at the same time….all of these things contribute to returning a little guy to who he is.

You don’t FIGHT the adult feelings but like that magical river they will come and go, and as you become more used to letting a little boy live in those feelings, he’ll find that his instincts to think about something else, to control his feelings, will slowly become less pronounced, and he’ll end up in a far gentler place than if you had forced him there by other means.

6 Replies to “Regression and the Adult Baby”