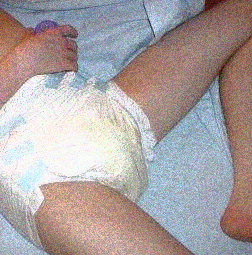 An awesome ‘little’ guy who reads this blog wrote to me about some of his feelings and made a comment about diapers: “The diapers are only material things that exist to help us ABs get into the mindset we desire.”

And it had me wondering: are diapers part of a series of steps to being an adult baby? Could you be in an AB set of mind without diapers? Or is there something else going on?

One of the main reasons I wrote this blog was to represent a part of the AB/DL spectrum. To show that there are as many types of AB/DLs as there are people. And in particular to explore the ‘softer side’ – the part of being a dad/son in an AB/DL relationship that’s about safety and care rather than about strict control.

So there’s probably a spectrum of feelings about wearing diapers and what they mean related to being and feeling like a baby or toddler. I can only share what they mean to me as a dad.

Being Little
Now, there are lots of ways that a ‘boy’ might show his little tendencies with me. Maybe he’s shy, blushes, or talks excitedly. Maybe over time he acts a little more playful – going to the mall, he’s attracted to the Disney store as much as the Apple store (and maybe more!) Maybe he still dresses like an adult but you notice he tends to like certain clothes that give a slight boyish touch. Going to a movie he chooses a cartoon over an action flick, he has a big ice cream sundae instead of some fancy dessert in a restaurant.

There are lots of ways that a son can have a little side. And yet, I can’t help feeling that they’re incomplete.

Being a dad to a son who is playful, child-like, and who acts as much like a kid as an adult would be wonderful – all of life should have more of those qualities. Myself – I try to bring more ‘play’ to work, for example, and it releases creativity and joy.

The First Diaper
But imagine the act of diapering that boy for the first time. Imagine how the play and child-like feelings between dad and son change when he’s diapered by his dad and the feeling of the soft crinkly diaper under him signals a new way of thinking about the ‘little’ side within.

For myself, this isn’t an act of a son submitting to me, it’s an act of submission to the truth of his inner child, his toddler or baby, and I’m there to help him find that voice. His gift back is that he’s allowing himself to be a little helpless with me, to depend on me and to need me – and what greater thing in the world is there than to be needed?

Diapers become a physical signal of all of these complex and wonderful feelings. They represent being care-free, dependent, cared for and loved. At the same time, the son has his little side, in which he’s maybe playful, a rascal, shy or babyish. The combination of these two things – the AB voice and the signal that the diapers send, combine, and open up the possibility of great care and warmth.

Toddler Time
As the emotions swirl, daddy can help his little one channel those feelings and give them a home. Cuddle time can help to channel the warm side that needs love and affection. Play time with his blocks or cars can bring out the carefree space where thoughts are like floating clouds. Feeding time can help to tap a need to be looked after.

As daddy finds out which toys and clothes and objects help his son to find those more pure spaces in his babyhood, he’s also taking on choices for his little one. Taking away the need to decide some things helps the son to find ways for his feelings to take their natural shape and rhythm. This is also why different ABs will have different needs – some will need less or more care than others, because the natural shape of their feelings is their own.

Changing, And Being Changed
Through it all, the constant of the diapers helps to ensure that there’s a foundation, almost. That as the baby boy finds his inner voice he can be sure that in all his little explorations there’s one thing that creates a certain bond: his diapers.

When daddy gives him a diaper check it doesn’t matter what he’s doing or what space he’s in…he’s reminded that daddy cares for him and that he needs his daddy. When he feels himself wetting the warm spread in his diaper reminds him that he has allowed himself to be a little helpless and babyish, and this helps him stay close to the little voice inside.

And when daddy changes him out of his wet diaper, daddy returns his son to that safe, gentle beginning, and returns to the hope that it has no end.

But what do you think? Are diapers just a way to get to your AB side? What do they mean to you? Does the ‘little you’ only come out when diapered? And what does it mean to have a daddy diaper you instead of diapering yourself?

8 Replies to “Are Diapers the Why or the How for the Adult Baby?”